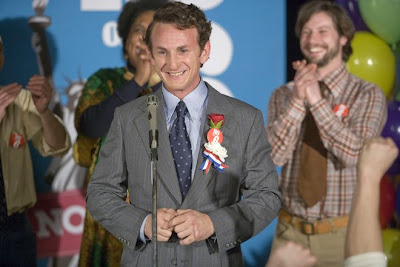 Sean Penn (A 2007 Telluride attendee) as Harvey Milk in "Milk" may be on his way to another Oscar!


The Golden Globes noms are out and this morning the nominations from SAG were announced...and a slew of Critics choices and Top Tens are out so the last two weeks have seen some movement, so here is our pre-holiday update...Ultimately, it now seems that the 5 nominations for Best Picture come down to 7 films and two of them will left outside looking in.(Telluride connections in CAPS & BOLD)

Best Picture: SLUMDOG MILLIONAIRE, BENJAMIN BUTTON, Milk, Frost/Nixon, and Dark Knight
Lurking: Revolutionary Road, Doubt, Australia, The Reader, The Wrestler
Comment: Generally the retreat by Australia continues and now Revolutionary Road is struggling...The Globes should have provided Rev Road with a shot in the arm, but this morning's SAG awards hurt it some (since DiCaprio missed on Best Actor and it didn't get an ensemble nod). Doubt is the film that got a lift this morning. As to this evaluation...the two biggest movers in this category were SLUMDOG up 2 spots and Milk down 2...although I think both of these also got boosts this morning...Milk, however took a hit from the Globes...yet despite that, I think it's a very likely Best Pic nom.


Director: BOYLE/SLUMDOG, FINCHER/BUTTON, Van Sant/Milk, Howard/Frost, Nolan/Dark Knight
Lurking: Mendes/Rev Road, Aronofsky/Wrestler, Daldry/The Reader, Demme/Rachel Getting Married, Eastwood/Gran Torino
Comments: Mendes actually jumped up a couple of spots as does Daldry. Eastwood is back on the list despite the fact that Gran Torino also seems to be losing some steam.

Actor: Penn/Milk, Rourke/Wrestler, Langella/Frost, DiCaprio/Rev Road, PITT/BUTTON
Lurking: Eastwood/Gran, Jenkins/Visitor, Brolin/W, Del Toro/Che, and Hoffman/Harvey
Comment: The only big mover here is Eastwood who drops a couple of spots out of the nominees. Pitt returns and his SAG and Globe noms probably help him quite a bit. I still think Richard Jenkins will sneak a nom and his SAG nom helps.

Actress: Winslet/Rev Road, Streep/Doubt, Hathaway/Rachel, Jolie/Changeling, THOMAS/LOVED YOU SO LONG
Lurkers: HAWKINS/HAPPY-GO-LUCKY, BLANCHETT/BUTTON, Leo/Frozen River, Beckinsale/Nothing Bot the Truth, Kidman/Australia
Comment: Movers...Jolie back up 2 spots, Blanchett takes a big dive of 3 spots. Her exclusion from both Globes and SAG may doom her shot. Melissa Leo got a lift this morning with her SAG nom. Ultimately, the 3 Telluride connected actresses may all end up being shut out...or fight for the fifth spot or they could all end up with nominations.

Supp. Actor: Ledger/Dark Knight, Hoffman/Doubt, Downey/Tropic Thunder, Brolin/Milk, Shannon/Rev Road
Lurkers: Franco/Milk, PATEL/SLUMDOG, Fiennes/Reader, Schreiber/Defiance, Fiennes/Duchess
Comment: Michael Shannon, whom I have thought was a lock, is a substantial dropper (2 spots). The other note is Ralph Fiennes lurking in 2 different movies now. Heath Ledger still seems to be the prohibitive favorite and that is unlikely to change. Patel gets a lift from his SAG nom and the general upward trajectory of Slumdog in almost all of its categories.

Lurks: The Visitor, The Wrestler, Australia, Burn After Reading and The Changeling

Comment: Burn and Changeling new to the list...No other big movement.

Telluride still looks like 10 noms and 4 lurkers in the Big 8 categories with tech, foreign and animation noms still to be included. Those may actually boost the number of Oscar nominations for Festival linked films past last year's total. I am thinking the BUTTON will lead all pictures with double digit nominations and that SLUMDOG may have as many as 9...Pic, Director, Supp Actor, Adapted Screenplay, Score, Song, Sound Editing, Film Editing and Cinematography...
Posted by Michael Patterson at 12:40 PM No comments: Links to this post 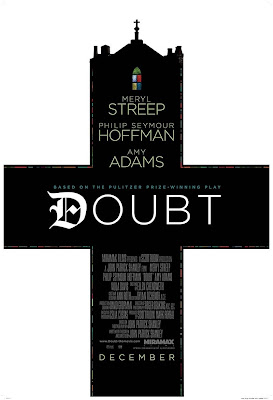 3 Months away from Telluride and a couple of months til Oscar night...

Telluride connects in CAPS AND BOLD.

Director: DANNY BOYLE, Gus Van Sant, DAVID FINCHER, Ron Howard, and Christopher Nolan...Lurkers: Darren Aronofsky, Baz Luhrmann, Sam Mendes, Jonathan Demme, and Stephen Daldry.
Comment: Boyle moves into the #1 spot for Slumdog...very exciting for those of us that got to see the film in Telluride. Big Movers: Boyle and Ron Howard are both up a couple of spots...The Frost/Nixon trailer looks amazing. Baz Luhrmann drops 5 spots as "Australia" goes south in every category in which it was competitive last month. (as a mater of fact, it was in play for 3 noms among the Big 8 last month and is gone from all 3 categories now).

Actor: Sean Penn/Milk, Mickey Rourke/Wrestler, Frank Langella/Frost, Clint Eastwood/Gran Torino, and Leonardo DiCaprio/Revolutionary...Lurkers: PITT/BUTTON, Jenkins/Visitor, Del Toro/Che, Brolin/W, And D. Hoffman/Harvey.
Comment: I've seen the trailers now for both Milk and Frost/Nixon and both Penn and Langella look amazing! I've also seen the Gran Torino trailer...uhh, Clint looks OK, but not in their league...of course, they're trailers, soooo...And I saw Richard Jenkins in "The Visitor" last week. A really nice performance. I'm guessing he ends up with a nomination after it's all said and done.
And another quick observation...it looks increasingly like Best Actor will come from a non-Telluride film for the first time in quite a few years. Big Movers: Eastwood moves up 2 spots and Hoffman appears on the list for the first time...that's Dustin not Philip Seymour...

Actress: Meryl Streep/Doubt, Kate Winslet/Revolutionary, Anne Hathaway/Rachel, CATE BLANCHETT/BUTTON, and KRISTIN SCOTT THOMAS/LOVED YOU. Lurkers: Jolie/Changeling, HAWKINS/HAPPY-GO-LUCKY, Leo/Frozen River, Kidman/Australia, and Beckinsale/Nothing.
Comment: Potentially the category upon which there may be the most Telluride emphasis (although I expect that actually will be Foreign Film...in which all 5 may have been at Telluride). Big Mover: Blanchett soars 5 spots. Kidman drops 2 spots.

Supporting Actor: Heath Ledger/Dark Knight, P.S. Hoffman/Doubt, Michael Shannon/Revolutionary, Robert Downey, Jr./Thunder, and James Brolin/Milk...Honorary inclusion for James Franco for Milk as he trailed Brolin by one point...Lurkers: DEV PATEL/SLUMDOG, Schreiber/Defiance, Fiennes/Reader, and Irwin/Rachel.
Comment: Mr. Patel makes a substantial move, up 3 spots and I expect the trend to continue as the heat for Slumdog just seems to be getting hotter. Downey and Fiennes are big movers up as well.

Original Screenplay: Milk, Rachel Getting Married, Vicky Christina Barcelona, HAPPY-GO-LUCKY, and Wall-E. Lurkers: Wrestler, Visitor, Australia, Gran Torino, and Seven Pounds.
Comment: The fall of Australia continues in this category as well as it dropped 5 spots. Other Big Movers: Wrestler up 3 and Seven Pounds making its first appearance. And it looks impressive in trailers as well. Stronger,to me at least, than Pursuit of Happiness...which has the same pedigree in terms of actor/author/director.

Nom leaders (in the Big 8 categories): Milk and BUTTON with 5, Revolutionary Road, Doubt and Frost/Nixon have 4 and 3 for SLUMDOG MILLIONAIRE and Dark Knight.

Totals of noms and lurks:
1) Revolutionary Road (7)
2) Milk/BUTTON/Doubt (6)
5) SLUMDOG/Dark Knight and Frost/Nixon (4)
Posted by Michael Patterson at 2:32 PM No comments: Links to this post